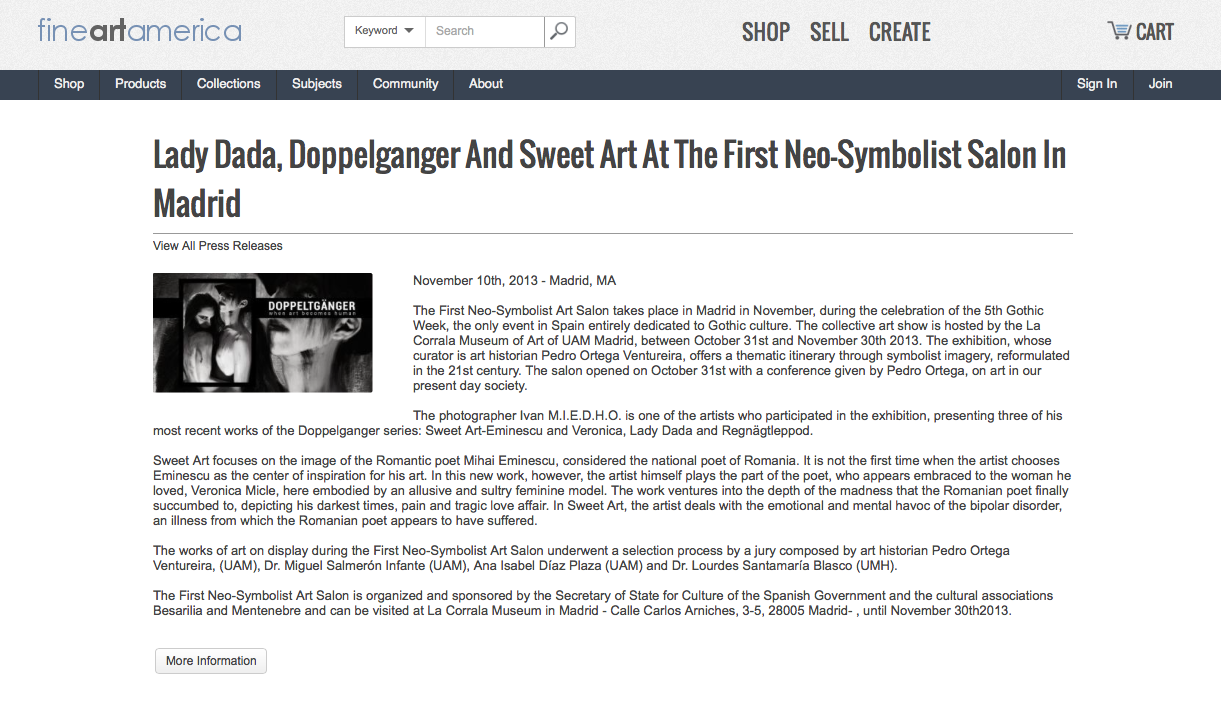 The First Neo-Symbolist Art Salon takes place in Madrid in November, during the celebration of the 5th Gothic Week, the only event in Spain entirely dedicated to Gothic culture. The collective art show is hosted by the La Corrala Museum of Art of UAM Madrid, between October 31st and November 30th 2013. The exhibition, whose curator is art historian Pedro Ortega Ventureira, offers a thematic itinerary through symbolist imagery, reformulated in the 21st century. The salon opened on October 31st with a conference given by Pedro Ortega, on art in our present day society.

The photographer Ivan M.I.E.D.H.O. is one of the artists who participated in the exhibition, presenting three of his most recent works of the Doppelganger series: Sweet Art-Eminescu and Veronica, Lady Dada and Regnägtleppod.

Sweet Art focuses on the image of the Romantic poet Mihai Eminescu, considered the national poet of Romania. It is not the first time when the artist chooses Eminescu as the center of inspiration for his art. In this new work, however, the artist himself plays the part of the poet, who appears embraced to the woman he loved, Veronica Micle, here embodied by an allusive and sultry feminine model. The work ventures into the depth of the madness that the Romanian poet finally succumbed to, depicting his darkest times, pain and tragic love affair. In Sweet Art, the artist deals with the emotional and mental havoc of the bipolar disorder, an illness from which the Romanian poet appears to have suffered.

The First Neo-Symbolist Art Salon is organized and sponsored by the Secretary of State for Culture of the Spanish Government and the cultural associations Besarilia and Mentenebre and can be visited at La Corrala Museum in Madrid – Calle Carlos Arniches, 3-5, 28005 Madrid- , until November 30th2013.